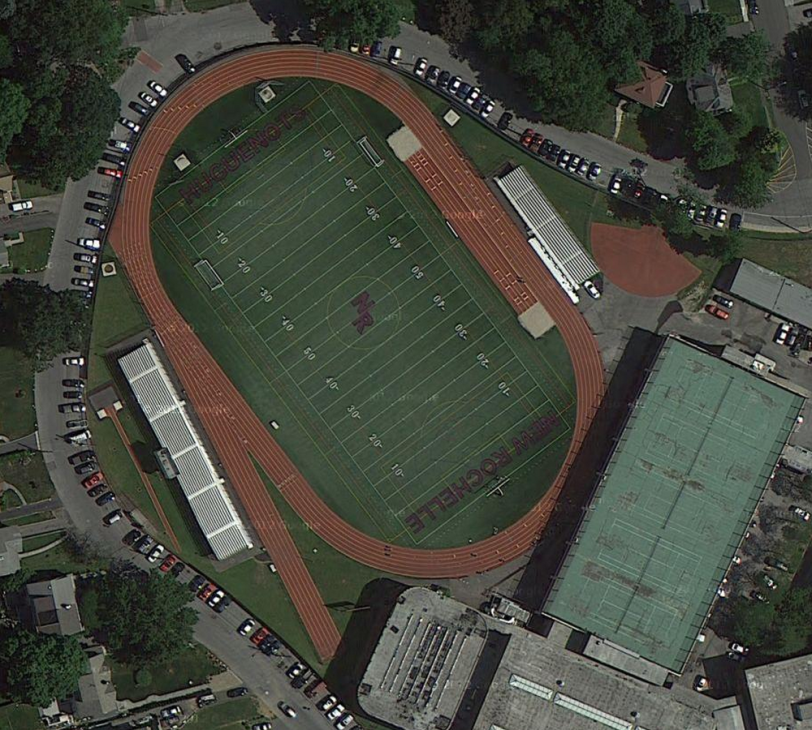 In searching for tracks this week, I happened to stumble across this one found at New Rochelle High School in New Rochelle, NY.  It’s pretty obvious why this one caught my eye.  This is not your ordinary track.

At first glance, it looks like it’s almost a true oval.  The straightaways are really short, and the curves are really long.  Notice how the corners of the football field go right up to the track itself.  This also results is some very small D-zones at both ends.

The other feature of this track that stands out (literally) is the full straightaway that juts out at its own angle.  I have never seen this before.  Extended straights are not that rare, but when they extend off the curve in a different direction – that is rare!  If you zoom is closer, it looks like there are marks on the straightaway for placement of the hurdles.  You’ll also notice that there isn’t a finish line at the south of the straight though, so they run the 100m and the short hurdles in the opposite direction, south to north!

The oval has six lanes, and based on the track markings, this has to be a shorter track.  The exchange zones are located in odd spots.  The starting lines for the 200m are also in a different spot, in the middle of the back straight.  So in that race here, it’s a short straight, then a long curve, and finish with a short straight.  I don’t know if I would like this, but I do think it would be fun to race a 200 here once just to see what it’s like.  You’ll also notice that there are several straight lines running across all six lanes at various locations.  These are probably start lines for different races, that has to be in different spots because of the non-standard track length.  I don’t know if the Huguenots host many meets here or not, but it’s definitely a unique facility that will provide a unique experience.