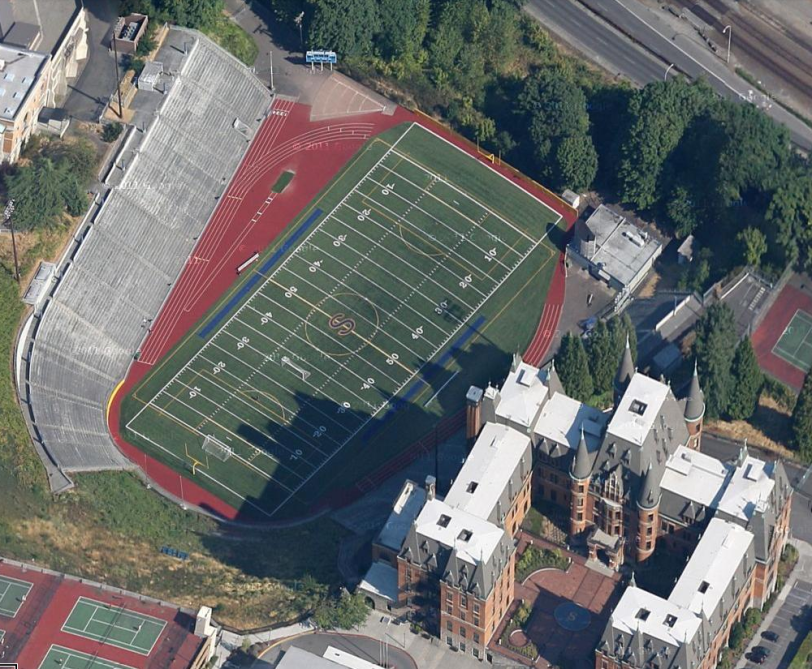 It’s back to the US again for today’s track, and it’s another high school facility.  This one though, is one like I’ve never seen before.  Stadium High School is a historic landmark with an interesting history.  Construction on the building began in 1891, and it was supposed to be an impressive, luxury hotel, but it was never completed.  A few years later, a fire completely gutted the remaining structure.  It was then, in 1904, that the school district of Tacoma bought the property and turned in into a school.  And this is one incredible looking school!

To go along with it, there is an equally impressive stadium right next door.  Stadium Bowl is just that – a huge bowl stadium, with the seats built right into the side.  The stadium opened in 1910 and had a seating capacity of 32,000.  Because of some structural issue, several renovations and restorations have had to occur, resulting in a reduction in the seating by about half.  A very interesting history of the stadium, along with some old photos, can be found HERE.

Now to the track.  From what I can gather, the Google photo at the top is more current than the wide one below.  In the bottom picture, there is a full track (although it’s a weird shape) that goes around the football field.  Sometime between 2010 and 2012, the old artificial turf was removed, replaced, and was seemingly expanded into parts of where the track once was.  Part of the track is still left, which probably is used for training.  I suppose they could host a five-event meet here (100m, 100 hurdles, long & triple jump, and shot put).  Regardless, this is one awesome stadium, next to a fantastic high school.

360Cities view from the center of the field